So you want a ground mounted vertical.pdf (145,2 kB) by Don Warkentien WØDEW

The Kenwood TS-940 is a classic radio. Introduced in 1985, it is the successor to the TS-930 and is highly valued for its nearly bulletproof reliability, excellent receiver, and high-quality transmit audio. One of the TS-940's strengths is the use of PIN diode transmit-receive switching, which enables the radio to be used for full-break-in CW keying (QSK). In QSK mode the radio quickly switches back to receive in between transmitted CW elements.

This strength is a weakness when interfacing the TS-940 to modern linear amplifiers, which are very sensitive to transmit signal timing. Most new amplifiers will go into a fault-protective mode if RF energy is present on their input connector during the off-to-on transition of their send relay; because of the QSK nature of the TS-940, and a relatively slow transmit-receive (T-R) relay internal to the radio, this issue is very likely to occur when it is interfaced to modern amplifiers. There are many possible solutions; two of them are as follows: 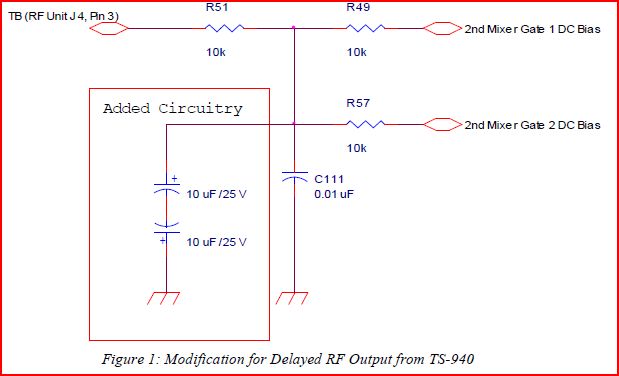 This modification is easy to perform - - and easy to remove, should you change your  mind at a later date. The capacitors are added at the junction of R51, R57, and R49,   which is next to connector J2 on the RF Unit. This can be completed with the RF Unit PC board in place. The resulting transmit timing is shown in Figure 2.

Figure 2: Transmit Timing after the Modification.

The top trace in Figure 2 is the TB (Transmit B+) signal inside the TS-940, and the bottom trace is actual RF at the antenna connector. The unit is in RTTY mode in this photo, but similar timing is enforced for all modes, as the delay circuit is active in all modes. Once this modification has been performed, QSK capability in CW is still present, but the first transmitted CW element may be truncated. With some additional thought, this could be prevented by adding an electronic switch to take the capacitors out of the circuit in CW mode.

Transmit timing is critical to the health of linear amplifiers, especially modern solid-state models. The TS-940 will provide excellent service in these applications with the addition of this modification.